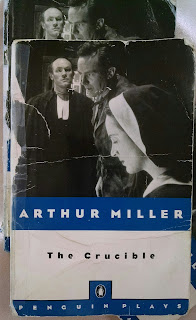 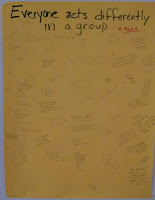 As we briefly discussed the article in class the following day, students in one particular section focused more on the what the article had to say about when people chose to break from groups to help.  The article mentioned a study done by professor John Darley at Princeton University which found that people were more likely to help those in need if the person needing help looked like the person offering help.  My students wanted to talk about this, wanted to analyze how we judge one another based on our appearance.  We were off to a good start. 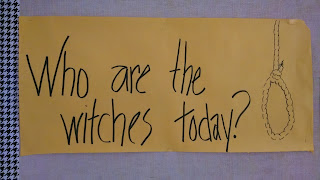 I then had students read the opening act of The Crucible, and in particular asked my readers to pay attention to who the witches are and how they were judged and reacted.  What does The Crucible help us understand about group behavior? Students then answered a series of pre-discussion questions to get them back into our article reading looking for evidence to support our responses during a full class discussion of why people act differently in groups.  Students were ready. They wanted to talk. 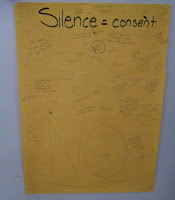 I have the story of The Crucible being recreated in my classroom.  Particular students are on a witch hunt, wanting to point fingers at who is judging them. Others elect to remain silent, either figuring the conversation doesn't directly impact them or out of fear of being judged themselves.  And I am unsure how, or if, I should point this dynamic out to our class.
Posted by Jennifer Ward at 5:40 AM

Email ThisBlogThis!Share to TwitterShare to FacebookShare to Pinterest
Labels: Curriculum Resources, In Response

Wow, Jen.Your last paragraph is so powerful. This is a tricky one. Not knowing the players makes suggesting a path hard -though I'm leaning toward telling them just what you told us. Can you buy yourself a day to figure this out while their emotions settle down with a non-Crucible activity?

Good luck and let us know how it turns out.

So, it turns out that I didn't have to point anything out. When we reframed our discussion during yesterday's class and reconnected with the text of the Crucible, one of the students in class pointed out some of the similarities. Yesterday went well, but there is still tension for some of the discussion participants. Most students have moved forward, but a few have not. I'm not sure how to bring those few back into the fold.