For a few weeks now, Karter has been getting up earlier and earlier.  He'll wake at 3 AM and drive 40 minutes to the farm. He's helping to transition the dairy cows to a different milking time.  Every few days, they're moving the milking time back just a little more in order to transport the cows later in the month to a new farm. Dairy cows are very particular about when they are milked, and so a delicate, well-timed transition in milking times makes this move possible. Once the cows are moved, Karter's job on the farm will be over, and he'll have to look for a new job. He comes to journalism class after working a full morning on the farm. 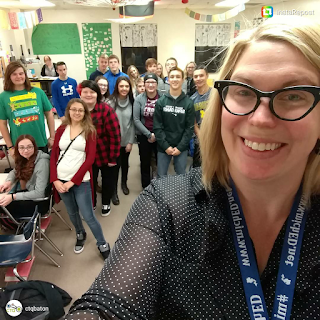 Allen has been living on his own for the past two years.  He's an emancipated minor. In Public Speaking class last week, he gave a moving speech about what it is like living on your own at seventeen. Contrary to how much his peers complain about their parents, he described the alternative as a lonely, sometimes dark place.

Sara has a one year old daughter who's blood recently tested high for lead contamination. They can't figure out where her daughter would have been exposed to lead. She's just received her third doctor's opinion and has missed 29 days of our journalism class.

I cannot count the number of students that I have sitting in my classroom who at one point in time have been in "the system" with Child Protective Services.  "After you've been in 'the system'," Bethany says, "CPS follows you. They track you until you are 18, sometimes showing up at school to ask the same questions they did 10 years ago."

I have students working two or more jobs in order to help with their family's expenses.  I have homeless students, orphaned students, sick students, students teetering on so many different precipices. I work in a Title 1 school with over 50 percent of my students receiving free and reduced lunch.

I work in a rural school.

In some ways, the students that I work with are no different than those that I worked with earlier in my career in a more affluent area outside of Philadelphia. Students want to be heard, valued, and understood. They all are struggling to understand their roles, identities, and purpose. Rural or urban, suburban or somewhere in between, adolescents everywhere want to know that their voice matters.

It is the particulars of their experiences that have power. But my students are so in the thick of their own stories that it is hard to see outside of them.  They don't see themselves as unique, as having stories to tell. My students can tell you in great detail how to field dress a deer, how to restore a '57 Chevy truck, the best places to find refurbished auto parts, how to clip a goat's hooves, the best rivers to kayak, how to catch air snowboarding. But this is just what they do. "These are not stories," they tell me.

Until we start to unpack these experiences.  Why did you chose to restore that old Chevy? Isaac tells us that it was sitting in the yard after his grandfather passed away.  Together Isaac and his dad worked to bring it back to its former glory. Isaac tells us stories about what it is like to work side-by-side with his dad.  He has these memories that tie him with the men in his family. His grandfather, his dad, and now Isaac have all worked on this machine; their histories are tied to this truck. It is by far, the most memorable vehicle in our student parking lot, shiny robin's egg blue with wooden rails lining the back bed. "It's road ready, but I wouldn't say it's road safe. Kinda like my grandfather," Isaac says.  There's another story there just waiting to be shared, and you can hear it in his voice.

Opening up space for stories in our classrooms is powerful not only for the authors but for the community of learners in our classes.  Stories are powerful when they are shared. I have watched stories transform my classroom community, whether we are telling fictional stories or sharing our personal truths.  Yet by the time I see them in my high school English classroom, so many of my students do not see the value of their stories. "I have nothing," is a chorus I often hear at the beginning of the semester after introducing the first writing prompt.  My student writers shut down for so many different reasons. They have been told or shown that their stories do not matter, that their experiences are not valued. They do not readily trust my voice coaxing them to share.  They do not see their words as having any power.

It takes a few weeks, sometimes longer, until the stories start of pour out. And then they flood our classroom. They change our classroom. They connect us. About a year ago, I started to look for resources outside of my school that might help to amplify my students' voices. I want my students to not only see the value of their words inside our classroom but how powerful they can be for a much wider audience outside the walls of our school.  We work to publish our words on large platforms like TeenInk and Figment, both fantastic resources for students interested in publication.  However, they are large sites, featuring hundreds of new submissions daily. Stories change over quickly and can easily become lost.  So, we started our own space.

After connecting virtually with an editor at TeenInk in December of 2016, a group of students and I started MIteen Writers, an online and print literary magazine for teen writers in Michigan. We wanted to have a space to showcase the unique stories of writers from this state, to amplify the voices of mitten state teens.

So, the editorial team sat down and brainstormed what we wanted to publish, how our site should look, and who we hoped would access our online space. Our conversation with the editor at TeenInk helped us think through how we should design our submission guidelines, how many pieces we should post, and how we select pieces for publication. We launched our website in December of 2016 and shared it with the directors of most of National Writing Project sites in Michigan.  Within the first week, we had poetry submissions from Grand Rapids, Cheboygan, Portage, Kingsley, and more.  In fact, we were a bit unprepared for the number and quality of submissions that we received.  As we started to get off the ground, we had to meet regularly and figure out a system for who would review which pieces and how quickly we could respond to submissions. Our biggest challenge was not in getting the site started or getting the word out, it was in answering each of the submissions. To be honest, we are still struggling to keep up with the number of submissions that we've received but this is a great challenge to have.  It speaks to the need for such a space.  Over the past two months, we've received so many fantastic stories, essays, photographs, and of course, poems, which makes up the bulk of our submissions.

We've heard from students in small schools in northern Michigan, schools with graduating classes of under 100 students.  We've heard from students in the suburbs of Grand Rapids and from schools just outside of Detroit.  Students write about their experiences, their particulars, about what connects us as Michigan writers.  This great peninsula has so many stories to tell, stories of heartbreak and of joy, of harsh winters and sandy summers. Our stories matter. We're excited to have created a space to amplify the stories of our unique peninsula.