Much of my lesson planning is done in the shower. Turns out, this is true for quite a few people.  Scott Berkun summarizes some of the research of psychologist Mihaly Csikszentmihalyi in a blog post titled "Why You Get Ideas in the Shower."   Berkun writes,


"We have fewer and fewer places in our lives where we are not bombarded by inputs. For some people it’s yoga, going for a run, or going for a walk that quiets the conscious mind down enough for the sub-conscious to speak up. For other people it’s driving in the car. Everyone’s psychology is different and will relax in different environments, or at different times."

So, it makes sense that a great deal of my inspired lessons come to me during my early morning showers.

Take for example this morning. While washing my hair, I have this thought: why not use Twitter to teach students about the economy of words? By having students craft poetic lines in the space of 140 characters, we can use Twitter to talk about the power of word choice while at the same time using a public space to write for a real audience.  Two lessons in one!  Initially I posted using the hashtag #Twitterverse (clever, right?) but quickly realized the error of my ways when I searched the hashtag to see just how overused it is already.  So instead, we'll be using the hashtag #TwitterPoem to share our short verses.  Join us! 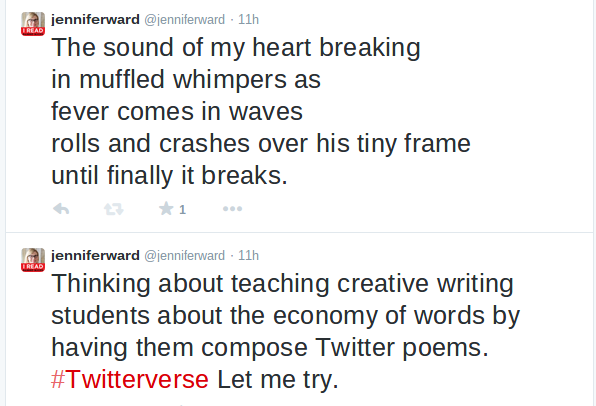 Posted by Jennifer Ward at 5:53 PM