“Memoirs are in essence historical documents. They are timeless perennials that not only describe a period of history, but also address the universality of collective human experiences. History, after all, happens to real people. It isn't just cold facts, but a living, organic changing thing. It is about life, human life, with all its triumphs and failures, its increases and decreases, its courage and weakness, its lights and darks.”
--Eleanor Ramrath Garner

As educator Eleanor Ramrath Garner writes in the introduction to her 2004 ALAN Review article titled “Memoirs In Adolescent Literature,” there has not been enough written about the significance of using memoirs and personal stories in the classroom. Whether it is because some teachers view memoirs as a grey area somewhere between fiction and non-fiction, or whether it is because of a lack of familiarity on the part of teachers, memoirs are generally a forgotten genre in the world of secondary education. This is strange given that the genre has been steadily rising in popularity with the general pubic since the early 1990s. In fact as early as 1996, New York Times writer James Atlas pointed out, “the triumph of memoir is now established fact.” And it is easy to understand why. As many writers have pointed out, memoirs not only expose readers to truths about the human experience, but they also connect readers to the lives of others. Memoirs, Atlas suggests, are “…a democratic genre -- inclusive, a multiculturalist would say. The old and the young; the famous and the obscure; the crazy and the sane…” Because anyone can be a memoirist, everyone can connect to the memoir.

This is an even more important idea to consider when reflecting on the use of multicultural literature in the classroom. A great deal has been written about the benefits of using the voices of writers from a variety of backgrounds in the classroom setting. Caroline Cavillo suggests,

“One should think of critical multicultural literacy as citizenship or character education, precisely because it concerns itself with issues of power, domination, authoritarianism, and the diversity of human beings and their decisions about how to act, think, and behave with others.”

It is for these reasons in addition to so many others that the use of literature from non-western writers has become a priority for many educators. Literature from traditionally under-represented populations not only broadens students’ cultural horizons, but it also aids in the articulation of shared and differing values, exposes students to a variety of writing styles and themes, builds empathy, and connects students to a world that is growing smaller through technological advances.

Although a great deal has been written about the importance of including multicultural voices in the classroom, and some has been written about how memoirs might be used, when combined, there are very few educators writing about the use of memoirs from non-western authors as a way to connect students to perspectives and voices from other walks of life. And yet, this seems to be intuitive. As educator and writer Katherine Bomer points out in her book Writing a Life: Teaching Memoir to Sharpen Insight, Shape Meaning--and Triumph Over Tests, memoirs are “…how we connect to each other, how we find out that other people feel the way we do. It is also how we learn about lives that are vastly different from our own so that our minds and hearts can stretch to understand how life is for others” (Bomer 2). An exploration of memoirs written by non-western authors brings numerous benefits to the secondary classroom. Such works are pivotal for

For more information on using non-western memoirs in the classroom, check out these resources:

And here are some great examples of memoirs written by non-western writers that could be used with high school students:


If you have any suggestions, I'd love to hear them!
Posted by Jennifer Ward at 12:37 PM No comments: Links to this post

In a recent posting on his blog, Will Richardson reacts to Nicholas Carr’s article “Is Google Making Us Stupid?” I was struck by Richardson’s question for educators: How is reading on the web changing the way we teach reading skills and strategies? He points out, “…what I do know is that very few schools are thinking deeply about what this all means in terms of reading development and practice.”

This is the very same issue that Motoko Rich raised in last Saturday’s edition of the New York Times. Although her article, “Literacy Debate: Online, R U Really Reading?” at times seems to declare that online reading is not educationally relevent, she does point out that the types of critical reading and thinking skills necessary to read on the web – “locating information quickly and accurately, corroborating findings on multiple sites” – are skills that are applicable to multiple areas of study. Unfortunately, as both Richardson and Rich have pointed out, schools do not seem to be catching on. Rich writes,

“Web readers are persistently weak at judging whether information is trustworthy. In one study, Donald J. Leu, who researches literacy and technology at the University of Connecticut, asked 48 students to look at a spoof Web site about a mythical species known as the “Pacific Northwest tree octopus.” Nearly 90 percent of them missed the joke and deemed the site a reliable source.

Some literacy experts say that reading itself should be redefined. Interpreting videos or pictures, they say, may be as important a skill as analyzing a novel or a poem.”

Instead of blocking and banning Internet use in our classrooms, 21st century teachers must learn to embrace this new frontier of reading. This means teaching our students to be critical readers and consumers of media. In reality, this is no different from the skills that we have been teaching our students. It is not necessarily a change in content; it is a change in where and how we apply the skills of critical literacy. Practically speaking, this means that English teachers must broaden our definition of what constitutes a “text.”

In order to prepare our students to live, work, and interact in an increasingly connected world, we must include reading web-based materials in our curriculum. If we continue to think that the only texts worthy of study are those that are bound together with glue, we are not only doing a disservice to our students, but we are also dooming our profession. Instead, we must include the reading and writing of blogs, wiki sites, and social networking applications into our curriculum. We can use these new technologies to open the doors the present as well as the past. Students and teachers can access annotated Shakespeare texts online as well as contemporary blog reactions to such traditional texts. Not only will utilizing Web 2.0 technologies engage our students, but they will also help them become more competent readers in the world they already dwell in – the world of Web 2.0.
Posted by Jennifer Ward at 4:03 PM 2 comments: Links to this post

Email ThisBlogThis!Share to TwitterShare to FacebookShare to Pinterest
Labels: In Response, Technology

The Changing Face of Pedagogy

Classrooms are getting a new look, and it’s not just the faces of students that change each year. New words are being added to the pedagogical handbook - bits and bytes, electronic circuits, mobile and wireless technology, networks, connectivity – the list is added to almost on a daily basis. The most significant change that has taken place in the field of pedagogy over the last decade has been the introduction of technology into the classroom as a teaching and learning tool. 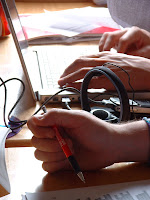 To misquote a popular phrase, the children of today are born with electronic chips in their mouths – they’re hardly walking but they’re already familiar with computers, laptops, mobile phones and PDAs. They learn to talk, but only after they know the ins and outs of these technological wonders. Simply put, they take to technology like fish take to water. So it’s no wonder when they walk into a classroom and face a computer with all the enthusiasm they would show on meeting an old and trusted friend.

It’s the teachers who are wary of the new technology and timid in its adoption as education tools. For some, it’s the fear of not being able to learn as much as they should; for others, it’s an innate stubbornness that prevents them from letting go of the past and accepting change as a positive thing. There’s no doubt that technology in the classroom is here to stay - because if we are honest with ourselves, we can see that computers and the Internet make it easier to communicate, evaluate and track performance. Resources can be shared, as can be work spaces. It’s a concept that involves interactive learning, with inputs from both the teacher and the student being necessary for progress.

Teachers must learn to let go of the tight reins of control they hold over their students and allow them to embrace the concept of collaborative learning, within their own school and with schools of similar ideals in other places and even other countries. It’s no longer necessary for students to depend on teachers for all their learning needs – Google plays the role well enough. But that does not mean that pedagogy is a fading art – teachers are still important when it comes to offering guidance. The vast amount of information available at their fingertips means that there’s an overload, and teachers can step in to help sort the wheat from the chaff. Students must also be taught how to use the resources at their disposal wisely – plagiarism and short cuts defeat the very purpose of the existence of the technology, which is to enhance and improve learning.

Teachers must equip themselves with the new skills that they need to be able to take technology head on and use it wisely, both for their own personal advancement and for the betterment of their students. The only thing that’s constant in this world is change, and if teachers can bring themselves to accept this philosophy, they’ll do both themselves and the children they teach a world of good.

This article is contributed by Heather Johnson, who regularly writes on Alabama teacher certification courses. She invites your questions and writing job opportunities at her personal email address: heatherjohnson2323@gmail.com.
Posted by Jennifer Ward at 10:24 AM 7 comments: Links to this post